To understand how Space Based Augmentation Systems (SBAS) such as WAAS/EGNOS/MSAS/GAGAN work, the conventional method of real-time differential correction (LBAS) will first be presented along with the factors affecting local DGPS accuracy. (Note that this section does not deal with carrier-phase differential).

Conventional DGPS involves setting up a reference GPS receiver with the antenna set at a point of known coordinates. This receiver makes distance measurements, in realtime, to each of the GPS satellites. The measured ranges include the errors present in the system. The base station receiver calculates what the true range is, without errors, knowing its coordinates and those of each satellite. The difference between the known and measured range for each satellite is the range error. This error is the amount that needs to be removed from each satellite distance measurement in order to correct for errors present in the system. 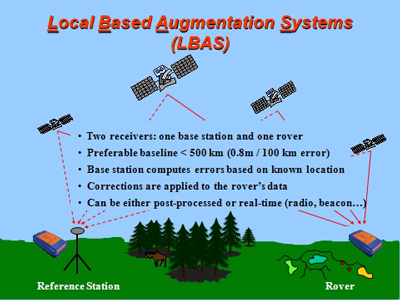 The base station transmits the range error corrections to remote receivers in real-time. The remote receiver corrects its satellite range measurements using these differential corrections, yielding a much more accurate position. This is the predominant DGPS strategy used for a majority of real-time applications. Positioning using corrections generated by DGPS radio beacons for example, will provide a horizontal accuracy of less than 1m to 5 meters with a 95% confidence depending on the quality of the GPS receiver used. Under the same principle, more sophisticated, short-range DGPS systems (10 to 15 km) can achieve centimeter-level accuracy using the carrier phase. In this case, we commonly refer to such a system as RTK instead of DGPS.

The US Federal Aviation Administration has developed a Wide Area Augmentation System (WAAS) for the purpose of providing accurate positioning to the aviation industry. In addition to providing high quality and accurate service for this industry, this service is available free of charge to all other civilian users and markets in Central and North America. This service falls into the greater category of the Space-Based Augmentation System (SBAS).

Upon the successful completion of a 21-day test on August 24, 2000, the Federal Aviation Administration of the United States of America announced that its Wide Area Augmentation System (WAAS) would be running 24 hours per day, seven days per week from then on. Testing has shown since that this signal is accurate and reliable. Since the date it was commissioned (July 10, 2003), WAAS has undergone a few changes in its satellite constellation and coverage (PRN 122 and 134 phased out and replaced by PRN 135 and 138 at new locations; and with the addition of ground monitoring stations in Canada and Mexico in September 2007).

Other government agencies have followed the pace and developed compatible SBAS systems for their respective geographic regions. In Europe, the European Space Agency, the European Commission, and EUROCONTROL have jointly developed the European Geostationary Overlay System (EGNOS). EGNOS is now fully deployed and in its pre-operational phase. The system will undergo certification for safety-of-life applications before becoming fully operational. Furthermore, on June 28, 2007, the European Space Agency and the Agency for Security of Air Navigation in Africa and Madagascar have signed a cooperation agreement with the objective of using satellite navigation to improve air traffic safety over the African continent.

In Japan, the MTSAT Satellite-based Augmentation System (MSAS) has been deployed by the Japan Civil Aviation Bureau (JCAB). Successful launches of MTSAT-1R and MTSAT-2 were followed by system integration for MSAS ground system and MTSATs by transmitting test signals from MTSATs. Purposes of test signal transmission were to optimize system performance and then to verify that augmentation information meets safety and performance requirements. Since those tests had been accomplished successfully, MSAS for aviation use was commissioned on September 27, 2007.

In India, the Indian Space Research Organisation (ISRO) and Airports Authority of India have successfully completed the final system acceptance test of the GPS Aided GEO Augmented Navigation system (GAGAN) as announced on November 20, 2007, by Raytheon Company. With the completion of the final system acceptance test, the stage is set for India to embark on the next phase of the program, which will expand the existing ground network, add redundancy, and produce the certification analysis and documentation for safety-of-flight commissioning. Inmarsat 4f1 was used during the system acceptance test. Awaiting the launch of its own communication satellite, the GSAT-4 (scheduled for June 2009), the Indian ISRO has stopped the broadcast of GAGAN test signals.
China has a similar program for an SBAS and the service is named the Chinese Satellite Navigation Augmentation System (SNAS).
The SXBlue GPS series is capable of receiving correction data from all compatible SBAS.

SBAS uses a state-based approach in its software architecture. This means that a separate correction is made available for each error source rather than the sum effect of errors on the user equipment’s range measurements. This more effectively manages the issue of spatial decorrelation than some other techniques, resulting in a more consistent system performance regardless of geographic location with respect to reference stations. Specifically, SBAS calculates separate errors for the following:

Figures below show the ground segments of the WAAS, EGNOS, and MSAS systems, respectively. In 2007, a total of 13 monitoring stations have been added to the existing WAAS network, increasing the ionospheric coverage for this SBAS constellation. The location is shown in red: 4 in Alaska, 4 in Canada and 5 in Mexico. 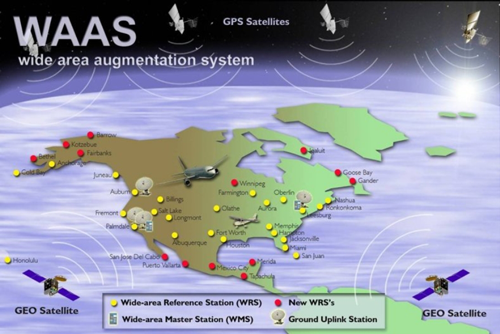 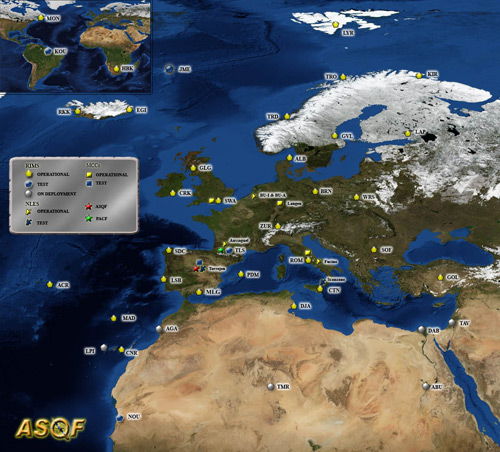 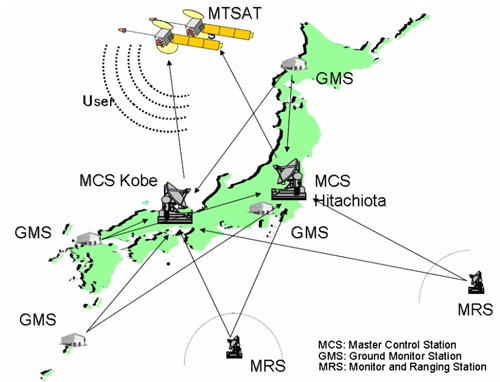 To enhance the information provided by SBAS, the SXBlue GPS has a unique ability to extrapolate the ionospheric information beyond the broadcast grid. This feature increases the usable geographic coverage area of an SBAS system.

The figure below depicts the current world SBAS coverage. This figure is only an approximation of signal coverage by each of the SBAS constellations. Although there is geographic coverage at higher latitudes, practical usage of SBAS will be limited to environments where a relatively consistent line of sight to the satellites from the SXBlue GPS system is available.

The map below shows the ionospheric coverage for each of the SBAS constellations. For WAAS, EGNOS, and MSAS, the grids shown are actual grids with no extrapolation. The grid shown for GAGAN was recorded by an SXBlue II GPS during the Final Acceptance Test phase and is not an official grid from the Indian authorities

The following table shows a list of all the PRN numbers allocated to each of the SBAS Constellations.

To improve upon the ionospheric map provided by SBAS, the SXBlue GPS receivers extrapolate a larger ionospheric map from the broadcast coverage map, extending its effective coverage. This allows the SXBlue GPS to be used successfully in regions where competing products may not. For example, the extrapolation provides enhanced coverage through the northern part of South America for WAAS, through the northern part of Africa for EGNOS, etc.

Please note that the process of estimating ionospheric corrections beyond the SBAS broadcast map would not be as good as having an extended SBAS map in the first place. This difference may lead to minor accuracy degradation. As an example, the figure below depicts the broadcast WAAS and EGNOS ionospheric map extent and the extrapolated version. As can be seen, the extrapolated grid extends further in all directions than the broadcast one, enhancing usable coverage.

Besides Dilution of Precision (DOP) and Multipath (that are errors that cannot be removed by differential correction), many factors affect the positioning accuracy that a user may expect from a DGPS system. The most significant of these influences include:

The proximity of the Reference Station

In an LBAS, the distance between a remote user and the reference station can sometimes be considerable, such as when using 300 kHz DGPS radio beacons. Consequently, some of the errors associated with GPS at the base station differ somewhat from those at the remote user’s location. This spatial decorrelation of errors can result in a relative position offset from the absolute coordinates of the remote receiver. This offset may be as much as one meter for every 100 km (62 miles) between the base station and remote receiver.

The causes of decorrelation are:

GPS satellite orbit errors are typically a greater problem with local area differential systems, such as that of radio beacons. The decorrelation effect is such that the satellite’s orbit error projects onto the reference receiver and remote receiver’s range measurements differently. As the separation between the receivers increases, the orbit error will not project onto the ranges in the same manner, and will then not cancel out of the measurement differencing process completely. SBAS networks, with the use of multiple base stations, are able to accurately compute the orbit vector of each satellite. The resulting corrector is geographically independent, so minimal decorrelation occurs with respect to position within the network.

The ionosphere and the troposphere both induce measurement errors on the signals being received from GPS. The troposphere is the humid portion of the atmosphere closest to the ground. Due to its humidity, the refraction of GPS signals at lower elevations can distort the measurements to satellites. This error source is rather easily modeled within the GPS receiver and doesn’t constitute a significant problem.

The error induced by the ionosphere is more significant, however, and is not as simple a task to correct. The ionosphere is the charged layer of the atmosphere responsible for the Northern Lights. Charged particles from the sun ionize this portion of the atmosphere, resulting in an electrically active atmospheric layer. This charged activity affects the GPS signals that penetrate this layer, affecting the measured ranges. The difficulty in removing the effect of the ionosphere is that it varies from day to day, and even hour to hour due to the sun’s 11-year solar cycle and the rotation of the earth, respectively. During the summer of 2001, the sun’s solar cycle reached an 11-year high, and going forward we saw a general cooling trend of the ionosphere over the few years that followed, thus with reduced ionospheric activity. Removing the effect of the ionosphere depends on the architecture of the differential network. DGPS radio beacons, for example, use a more conventional approach than WAAS or SBAS in general. DGPS beacons make use of a single reference station, which provides real-time GPS error corrections based upon measurements that it makes at its location. It is possible that the state of the ionosphere differs between the remote user and the single reference station. This can lead to an incompletely corrected error source that could degrade positioning accuracy with increased distance from the base station.

SBAS systems (WAAS, EGNOS, MSAS, GAGAN, etc) use a different approach, using a network of reference stations in strategic locations to take measurements and model the real-time ionosphere. Updates of the ionospheric map are sent on a continual basis to ensure that as the activity of the ionosphere changes with time, the user’s positioning accuracy will be maintained. Compared to using a DGPS beacon, the effect of geographic proximity to a single reference station is minimized resulting in more consistent system performance throughout all locations within the network.

The latency of differential corrections to a lesser extent affects the achievable positioning accuracy at the remote receiver since the magnitude of SA was turned to zero in year 2000. Latency is a function of the following:

Most of these delays require less than a second, though in some instances, depending upon the amount of information being transferred, overall delays of three to five seconds may occur. The effect of latency is mitigated by the COAST technology within the SXBlue GPS. This technology is especially valuable in conditions of DGPS signal loss where the age of corrections increases for each second of signal loss.

The quality of a GPS receiver has a dramatic influence on positioning accuracy. Consumer-based GPS products, such as many affordable handheld and fixed-mount receivers, typically operate with an accuracy of 3 to 10 meters horizontally 95% of the time. The accuracy of a particular product depends on the specific receiver’s performance characteristics. Higher accuracy GPS receivers are able to achieve sub-1 meter horizontal accuracy 95% of the time using real-time DGPS transmissions. The SXBlue GPS series fall into this latter category.