This section provides a brief and simple overview of GPS, a summary of the errors associated with the measurements, and the various types of differential corrections.

GPS – How it Works

The United States Department of Defence (DoD) operates a reliable, 24 hour a day, all-weather Global Positioning System (GPS). NAVSTAR (NAVigation Satellite Time And Ranging), the original name given to this geographic positioning and navigation tool, includes an official constellation of 24 satellites (plus active spares) orbiting the Earth at an altitude of approximately 22,000 km.

Basic Principle
These satellites transmit various coded information to GPS users on different UHF frequencies (for example, C/A Code on L1, 1575.42 MHz).
This information allows user equipment to calculate a range to each satellite. GPS is essentially a timing system – ranges are calculated by timing how long it takes for the coded GPS signal to reach the user’s GPS antenna. To calculate a geographic position, the GPS receiver uses a complex algorithm incorporating satellite coordinates and ranges to each satellite. Reception of any four or more of these signals allows a GPS receiver to compute 3D coordinates. Tracking of only three satellites reduces the position fix to 2D coordinates (horizontal with fixed vertical). The GPS receiver calculates its position with respect to the phase center of the GPS antenna. The latitude, longitude, and altitude of the antenna are referenced according to the current revision of the World Geodetic System 1984 ellipsoid WGS 84 (G-1150) (Note that the current G-1150 revision differs from the Original implementation of the WGS 84 datum. See “A Word about Datum” under the “Understanding SBAS” menu). 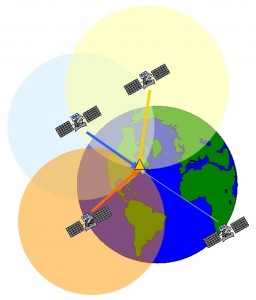 GPS Services
The positioning accuracy offered by GPS varies depending upon the type of service and equipment available. For security reasons, two GPS services exist: the Standard Positioning Service (SPS) and the Precise Positioning Service (PPS). The SPS uses a code modulated onto the signal for measurements and is referred to as the Coarse Acquisition code (C/A code). The US Department of Defense (DoD) reserves the PPS for use by its personnel and authorized partners. The PPS uses a different code than the SPS, referred to as the Precise Code (P-code) and contains more resolution than the C/A code. The DoD provides the SPS free of charge, worldwide, to all civilian users. 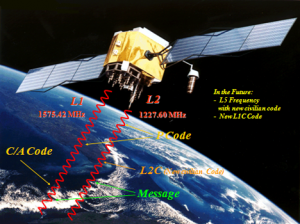 Currently, autonomous GPS is able to provide accuracy on the order of 10-15 meters, depending on the sophistication of the GPS engine. For many positioning and navigation applications, this level of accuracy is not sufficient, and differential techniques must be employed.

The Error Budget and the Need for Differential Correction
There are various sources of errors that alter the accuracy of GPS receivers and various ways to compensate for them.

The Error Budget
In order to maintain a strategic advantage, the US DoD used to artificially degrade the performance of the SPS so that the positioning accuracy was limited to 100 meters 95% of the time. This intentional degradation was called Selective Availability (SA). The effect of SA has been turned to zero since mid-2000 and has been officially ‘turned off’ (definitely) in 2007.

The primary sources of errors that now degrade GPS performance include atmospheric errors, the geometry of the satellites, multipath, timing, and satellite orbit errors.

Atmospheric Errors
Atmospheric errors are the most significant source of errors of GPS.
With the satellites orbiting at about 20,000km above the earth, the GPS signals have to travel through the ionosphere and the troposphere layers before reaching the receiver antenna. The ionosphere is the collective term for the various layers of ionized particles and electrons found at altitudes of 80–250 km in the atmosphere. Ionization is caused primarily by short-wavelength (X-ray and ultraviolet) solar radiation during the daytime. Ionospheric activities have the biggest impact on GPS accuracy.

The differential correction will greatly compensate for the atmospheric errors. 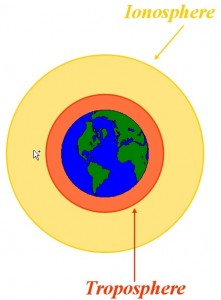 Satellite Geometry
Since a receiver uses triangulation from the GPS signals to determine its location on the earth, the better the geometry of the satellites in the sky, the better (neater) the triangulation result.

The effect of the satellite geometry on the position error is called Dilution of Precision, commonly referred to as DOP. A GPS receiver constantly computes a DOP value based on the satellites being used for the computation of the position (or fix). The better the geometry (satellites properly spread in the sky), the lower the DOP value. With all satellites confined in one part of the sky or blocked by buildings, mountains, etc, the geometry will be poor and the computed DOP value will be high. 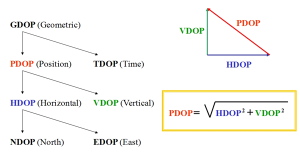 There is no fixed indication of what is considered a “good” or “bad” DOP. Knowing that the ideal DOP value is 1, different applications will require different accuracies and allow higher DOP fixes. Usually, 1 to 2 is excellent, 3 to 4 is good, 5 to 7 is fair and 8 and above is poor. But forestry companies, requiring only about 5m accuracies and increased productivity will work with PDOP’s as high as 8-12. The differential correction will not compensate for DOP errors. Instead, since the DOP is computed by the receiver, most GPS software will offer filters to prevent operation or recording when the DOP reaches a preset value.

Multipath
Multipath is the propagation phenomenon that results in radio signals reaching the receiving antenna by two or more paths. Causes of multipath include atmospheric ducting, ionospheric reflection and refraction, and reflection from water bodies, mountains, trees, and buildings.

The differential correction will not compensate for multipath errors. Certain precautions will minimize GPS antenna sensitivity to these reflected signals, like operating away from large reflective structures such as buildings. A high-end receiver/antenna combination will be more robust in rejecting multipath, whereas a consumer-level receiver will tolerate a high

Satellite orbit and timing errors
GPS satellites carry very accurate atomic clocks and follow very precise orbits. But drifts in both clock and orbit are inevitable and very small amount can cause significant errors in a receiver on the ground. Even though their clocks and orbits may not be adjusted, their offsets are computed by the GPS Ground Segment then sent back to the satellites. The satellites then broadcast the clock and ephemeris message to the end-user.
There is some latency between the actual occurrence of the offsets and the time they are computed and broadcasted.

Depending on the type of differential correction used (local or global), the effects of satellite orbit and timing errors can greatly be compensated.
What is Local Differential Correction?

Local Differential GPS, the most common form of DGPS, is essentially a differencing process that removes sources of error from the GPS position solution and improves the integrity of the GPS position solution. This type of differential is often called Local Based Augmentation System (LBAS) with corrections computed from a base station (where the antenna is set on a known point) and applied to the rover GPS either in real-time or in post-processing software. There are a number of methods of local differential measurement corrections.

Post Processing
This method is often used when either higher accuracy than achievable through conventional differential is needed, or a conventional form of real-time corrections is not available in the region where the rover receiver is being operated. Depending on receiver hardware and the methodology used for the post-processing, performance can be from many centimeters to millimeters precision. A variety of 3rd party software packages are available to post-process GPS raw measurement data.

Real-Time Kinematics
This method uses more sophisticated techniques to resolve the number of wavelengths between the satellite and the user, to provide centimeter-level positioning (or better) in real-time. This technique uses high-end receiver hardware, antennas, and internal operating software to compute accurate position solutions.

What is a Space-Based Augmentation System?
An SBAS is a more recent and different type of differential correction. It incorporates a modular architecture, similar to GPS, comprised of a Ground Segment, Space Segment, and User Segment: